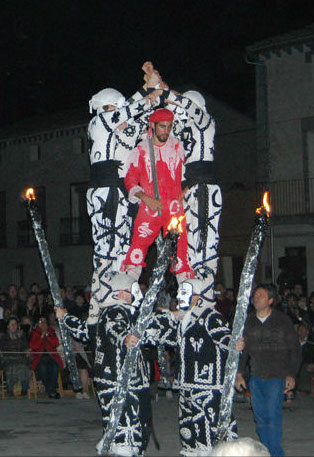 Every May 19, Cetina (Zaragoza) commemorates the festivity of San Juan Lorenzo with the representation of the Contradanza, spectacular succession of moves danced by colorful characters (contradanceros and devil) in the light of torches.

It is a traditional celebration to which a great antiquity is attributed. In 2012 it was declared an Inmaterial Cultural Interest Good.

The mudanzas are interpreted to the sound of a single melody that is repeated throughout the performance.

The protagonists of the dances are eight contradanceros, divided into two groups of four, wearing suits with black and white ornaments and covering their faces with masks.

With them also intervenes the devil, with a red suit and face adorned by large sideburns, mustache and goatee, all painted. In the last scene of the dance (“the barber” or “the shaving of the Devil”) is represented his death and subsequent resurrection.

The performance will begin in the City Main Square at eleven o’clock at night.

This site uses Akismet to reduce spam. Learn how your comment data is processed.